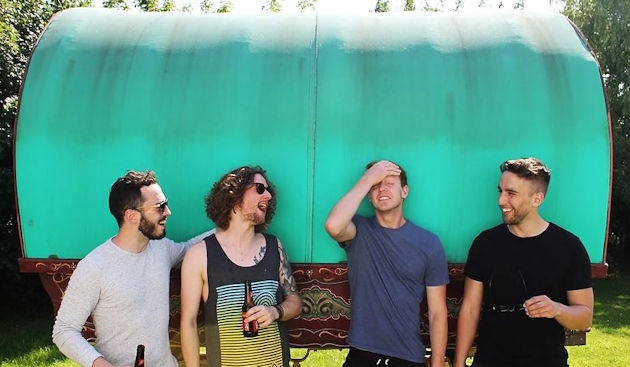 San Blas are a London based 4-piece band made up of (left to right) Jamie McCloskey (bass), Sam Thornton (vocals & ukulele), Chris Hammond (drums), and Chris Smith (electric guitar). It’s taken them a few years to develop the sound they wanted to make, but they hit the bullseye with the initial taster they released in late 2016, as I loved the energetic ukulele rock gem Zaid, which didn’t just make the Oct 16 mixtape, it was also in the Best of 2016 playlist!

They’ve since spent this year putting their debut EP together, the highly impressive 6-track release – Draw, Win, or Lose – which takes the traditional tones of the ukulele, but also adds further flavours, such as the energy of rock in Morgan and Zaid, an impressive horn propelled finale in the slow building Drive, and Spanish guitar flourishes in the epic Kiss from Argentina. Then there’s the incredible journey from a mellow beginning to the drumming induced foot stomping in Yellow Grey, and an equally melodic finale that is Reckless. Six varied gems, all topped off by the unique vocals of Sam Thornton that compliment the ukulele just perfectly.

I’ve been fortunate to see the band perform these tracks live too, and with two additional musicians guesting on brass instruments it made for an outstanding feast of melody and sound. San Blas are definitely ones to watch for 2018.