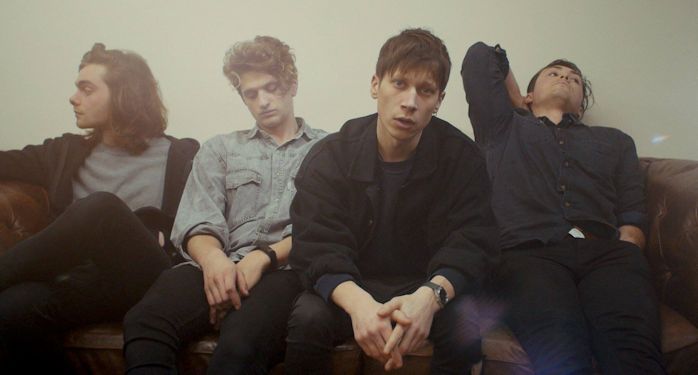 Taunton 4-piece October Drift only formed at the start of 2015, however the successful combination of some nihilistic alt rock music (or is it?) and a virtually non-stop UK touring schedule, has seen them receive a wide range of support and a reputation for impressive live shows (I’ve seen them – it is). They’ve already appeared here in Emerging #43, and now they face a Q&A, but what do wasps, kid’s party balloons, and Alan Rickman impressions have to do with rock ‘n’ roll? Read on to find out…

~ Where are you right now, and what can you see?
We’re currently sitting in our studio surrounded by a lot of brown and beige. And a lot of mess – it’s pretty cluttered in here right now. We’ve stupidly left our coffin guitar case in the way of the door, so to get through to the live room we have to turn into body contortionists. The sensible option would be to move it out of the way but we’re on a roll currently with a new song and don’t want to kill the vibe. We’ve also got a very large wasp flying around which is worrying because we had a huge wasp problem a year back where they ate through the wall and thousands poured in. Biz left a banana up here last night as well and which looks like the mice have been at. It’s definitely not the nicest studio in the world, but it’s certainly got character.

~ Your sound has been described in numerous ways, ranging from “sugar coated power-rock” all the way to “dark post-punk”, but how would you best describe it?
We always find this question hard, which is strange because we get asked it all the time and still haven’t come up with an answer we’re happy with. The need to pigeonhole ourselves is something that we’ve always tried to avoid. There’s definitely an incessant need to give a band a label and slot them into a certain bracket which everyone seems to have these days – we’re the same when we hear bands. We’ll turn to each other and be like ‘yeah they were really good, a bit like Nirvana but more punky’. We don’t know where this comes from though or why that need to compare and label is there. We try to avoid giving ourselves a label just because whatever name you put to it could cloud a potential listener’s judgement. I think the best way to listen to a band or track that you haven’t heard before is to just do it with a completely clear mind and not worry about any other factors. That way you take the music for what it is with no other influence.

~ You’ve released a number of excellent singles and EPs, but what are the plans for 2017, and is there an album on the horizon?
We’re pretty much constantly writing so we have a lot of material in the bank, but we don’t want to rush an album. As much as we enjoy listening to them and would love to release one, we don’t feel our profile is really there yet. We want to release one when there’s a real demand for it. It’s such a milestone that we don’t want to give it away too early and maybe hinder its potential. The plan for 2017 is tour supports and festivals and then maybe a headline tour after the summer. We want to be playing live as much as we can, because it’s something we really enjoy. We tend to get a bit restless when we haven’t played a show in a while. Dan and Chris start to lose their minds a bit.

~ You’ve worked hard this year gigging up and down the country, but do you have any touring rules when you’re on the road?
No, none at all. Our tours seem to be the constant battle of us trying to keep our sanity whilst our crazy Texan tour manager/sound engineer and our manager get smashed. They’re both really big personalities so most of the tour is spent head in hands trying to keep up with their antics. On the first tour our manager only spoke in Alan Rickman impressions and one night we had to beg our way into the Travelodge because they were both caught on CCTV pissing into a bin outside. We’ve found that the appropriate coping mechanism is to stay at a constant level of drunk. Not so much that you can’t perform, but just enough so you don’t mind hearing about the best way to cook brisket for the 20th time from an inebriated Texan. In all seriousness though, touring as the 6 of us is pretty fun. We all spend the most of our time taking the piss out of each other so being thick skinned definitely helps.

~ If you could collaborate with a famous musician, who would it be?
Names like Billy Corgan and Justin Vernon straight away spring to mind, cause they are big heroes of ours. But we’re all so bad technically on our instruments that I think it could be quite embarrassing. They seem to operate on another level and I think we could be very out of our depth working with them! I think maybe Leonard Cohen would be really fun to work with. He’s an insanely good songwriter and his latest album is really dark! We’d love to hear his voice over our music. No one can go as low as Leonard.

~ Are there any other new bands or musicians local to you in either Taunton, or further afield, that you recommend we check out?
Unfortunately there isn’t much of a local scene where we’re from. It’s a struggle with life itself for us to put on a show in Taunton as finding a venue that’s suitable is near impossible. We have gigged with some awesome bands across the country though. Virgin Kids, The Slow Readers Club, The Naturals, Spectres, Trash, Psyence, and Oliver Wilde are a few to check out. That’s just off the top of our head though, there’s a load more. Oh, and there was also this band who we played with at Twisterella Festival called Avalanche Party who we awesome. Really intense on stage and had a huge sound.

~ If you could curate a festival stage, who would you invite to perform?
Kiwi – Nick Cave
Chris – Smashing Pumpkins (original members)
Biz – Radiohead
Dan – Frank Ocean

~ Aside from music, do any of you have any other creative skills? (or obscure talents!)
Not really. We all had hobbies and things when we were younger but nothing that you could really call a talent. We were all in a skate team when we were at secondary school. We made a few horrific skate videos, which have never seen the light of day. I think they’re somewhere on Dan’s old computer. To be fair calling us a skate team is probably a bit optimistic. It was more like just a few kids messing about and having a laugh, but we dedicated so much time to it that we felt like we should give ourselves a name. Biz was constantly breaking bones. I think he broke 13 in total, so probably a good job we don’t skate now.

~ Who are your musical Guilty Pleasures?
Chris loves the Pet Shop Boys. Can’t get enough of ’em! Dan goes through phases of liking some unusual things. He wouldn’t stop listening to Justin Bieber’s album for a while. We had to ban him from talking about it at one point. He also got really into Matty from The 1975. Not the band – just Matty.

~ Which of you would win the award for the least ‘rock musician’ thing you’ve done this week?
Dan blew up balloons for a kid’s party at Hollywood bowl last night. Just to clarify he works there, he wasn’t just hanging around. He also once had to dress up in a mouse outfit and wave and dance and get his photo taken. I think he found it pretty humiliating.