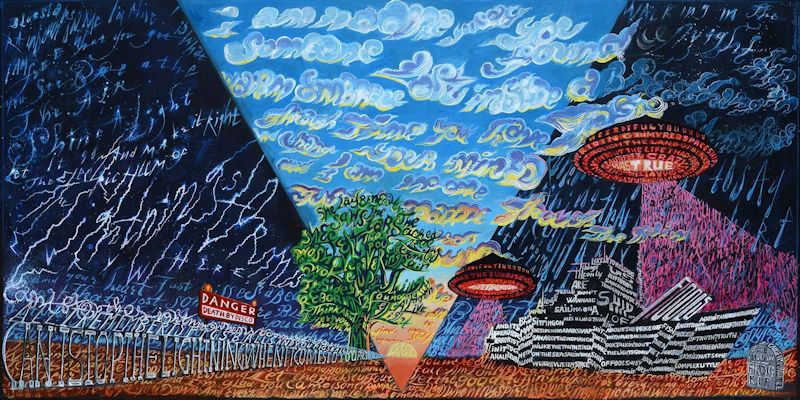 Inside album artwork by Ben Duarri aka ‘Screen Prince’, created using lyrics from the album. Each picture is a song.

Mojomakerz are an experimental music project created by Lincolnshire based musician & songwriter Paul Hegarty, who teamed up with Scottish musician, songwriter, & producer Ian James Stewart from the band Strangeways. The outcome of their collaboration is the musically rich album Tales For Sunrise, which also sees (among others) the producer Youth (Killing Joke), legendary musician Robert Wyatt, and Tony Foster (Spiritualized) putting in a shift. This Q&A is with Paul Hegarty, so read on to find out how it all came together, and what Cheech & Chong have to do with rock ‘n’ roll…

~ How did the two of you come together as Mojomakerz?
I’ve known Ian for over 20 years now & used to hang out with Davey, Ian’s younger brother. We used to go over to Ian’s studio all the time & over time I got to see how the studio & the recording process worked. I’ve always been in awe of Ian’s immense musical talent, so when I made some Mojomakerz demos a couple of years ago I took them over to him. He really liked the demos so I asked him to come on-board with Mojomakerz & that’s basically how we got together.

~ There’s a wide array of influences in your music, but how would you best describe it for those who may not have come across it yet?
It’s a cross between rock, electronica, and ambient music, with hints of Middle Eastern & African influences thrown in across the whole album. It’s a kind of east meets west vibe & It works really well too.

~ What did you find most challenging about the making the album?
In actual fact making the album was very organic, it all came together naturally. Luckily for us there weren’t really any challenges as such during the making of the album, as we are 100% independent & were releasing the album on my own label, so I think if anything, organising & getting everyone into the studio as everyone has busy schedules was probably the hardest challenge! In all honesty that wasn’t too hard as everyone loved the tracks & wanted to get involved, which was fantastic for us.

~ How did you get to collaborate with so many well-known names on the album?
I first met Youth 25 years ago when I lived in Mojacar, Spain, & was playing guitar in a rock band called The Flying Vultures. We had Keith Webb (Donovan’s drummer from the 60’s) on drums, & Youth was staying at Keith’s apartment, and one day Keith sent Youth over to mine to meet up & during his stay he came over to mine quite a few time to ‘socialise’ so to speak!

I contacted Youth again a couple of years ago & asked him if he’d take a look at the Mojomakerz website. Anyway he invited me to his house in London for a meeting to discuss the album, & I took a long 4 rough mixes of the album tracks. After he’d heard them he simply said he’d like to mix the album for us as he really liked the tracks, but he also gave us some great advice about changing a couple of things in the tracks, so that happened & I sent the finished mixes to Youth & we went from there!

I must add that I went to Youth with no expectations whatsoever, so naturally I was blown away by hearing this. Unsigned, unheard of and having one of the worlds best producers want to mix our album! It was a bit surreal, it really was, but it also gave us even more confidence because we already knew we were making great album. Youth invited me to London because he also knew we had Robert Wyatt on the album, & as Robert is now ‘officially retired’ Youth wanted to know how we had got Robert involved as he’d turned down a lot of work with major artists. Well, Ian has worked & known Robert for a number of years now & so basically what happened was that Ian played a couple of tracks to Robert, Robert loved the tracks and offered to help us out, that was that, fantastic! I met Tony Foster & Jason Pierce from Spiritualized whilst I was down at Youth’s, as he was producing their new album for them, & I got on really well with Tony, so when we completed the rough mixes & had sent these to Youth, he got back to me saying Tony loved the tracks & would love to get involved if possible. Again that was really great for us… basically it snowballed like that all the way so that’s how we got to work with everyone involved on the album.

~ Who were your musical heroes when you were growing up?
I really liked Chuck Berry & many of the blues greats like BB King etc. I also really liked Ian Dury & The Blockheads, Pink Floyd, Bowie… basically I was into everything across the board when I was growing up, from Metal to Reggae to Rock to Pop & some classical sounds too!

~ Which famous song by another artist would you love to have written yourself?
Imagine by John Lennon, I think it’s one of the greatest songs written.

~ If you were appearing on ‘Later with Jools Holland’, which track from the album would you choose to perform and why?
It would have to be ‘Ship Of Fools, in my opinion, as the track is very apt with what’s going on around the world today, who’s running this place & what’s going on? We’re all sailing on a ship of fools… the track says it all really, so it would be ideal.

~ What are your plans for 2016?
We plan to release an EP which we have already started working on, & possibly a few more mixes from the album. Live gigs is also something we have discussed as well but we’ll see how the year goes & get some more material together first.

~ Are there any other new bands or musicians local to you in Lincolnshire that you recommend we check out?
Our keyboard player from the album Charlotte Hubbard is in a folk band called Kinfolk.

~ Who would you choose to play the two of you in a film about Mojomakerz?
Haha… well, ooh err, perhaps Cheech & Chong would pull it off well!

~ Who is your musical Guilty Pleasure?
Okay, I also like listening to Prince, yes the Purple one… I think the man’s an absolute musical genius.

~ What would you tell your teenage self?
Don’t listen to people trying to put you off your dreams, & don’t share your dreams with just anyone! 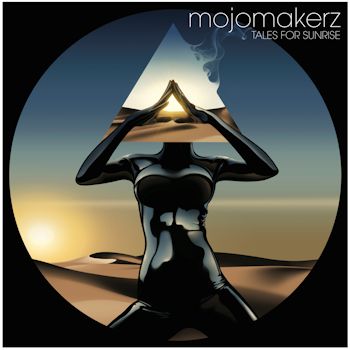