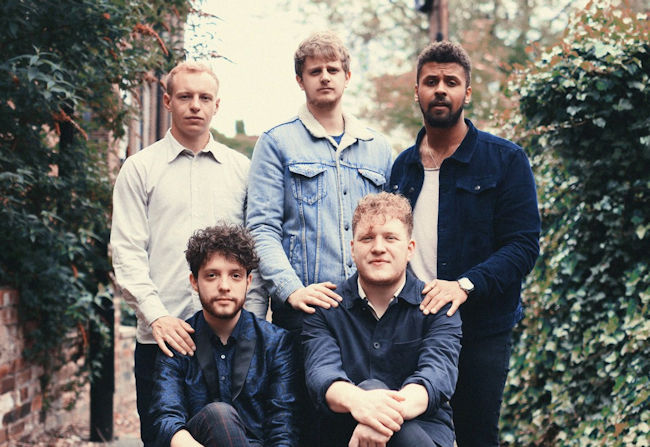 Leeds 5-piece Huw & the Greater Good came together in 2017, initially as Huw Eddy & The Carnival, but last year altered their name and direction towards the alternative/indie/folk group they’ve become. Consisting of Huw Edward Thomas (singer/guitar), Mak Dawson (bass), Callum Stubbs (drums), Luke Marley (keys), and Sam Jarps (guitar), they caught my attention only recently after uploading a track to Fresh on the Net, thanks to their lively and contagious sound. Now, ahead of more new music and live dates this spring, Huw and Mak face this Q&A, so read on to find out more about the band, where Bill Nighy & Girls Aloud fit in, and which one of them lays the most gorgeous patios!

~ How did you all meet, and what’s the background to the band?
Huw: We all met just after going to the same music college in Leeds. Mak (bass) and Sam (guitar) were an inseparable bromance couple, but the rest of us were on different courses and didn’t really know each other. I was studying classical singing, Luke and Callum were studying production, and two studying the pop course. I saw Mak play with another band, having wanted to get a band together myself for some time. His performance was super impressive and I asked him if he wanted to get involved, which he foolishly did! The rest of the boys were plucked from doing not very much in the weird year after uni, and we all came together properly and started playing together in March 2017.

~ Last autumn you evolved from ‘Huw Eddy & The Carnival’ to ‘Huw & The Greater Good’, but why?
Huw: We felt the name didn’t represent the music we were making, and wanted to continue making. We also felt we were being pigeon holed as a jolly festival band which we wanted to move away from. The music is constantly evolving which is really exciting for us! With the new name there has been a bit more a fresh slate and new sense of direction, maybe just to do what we like! It feels nice.

~ Your latest release, Welcome Love, is both an emotional journey, but with quite a lively & rhythmic folk-rock soundtrack, so tell us more about the song?
Mak: The song is written about anxiety and how it manifests itself in relationships. It sprung initially from one of Huw’s ideas, and we collectively added our own influences into it. This was the first song that took us in a different direction to what we’d been making previously, and it felt very fresh and exciting to put down. We’re happy that it has a grounding in ‘folk rock’ but that it also has a nice layer of something new, a groove and a ‘classic’ throw back sound, we hope!

~ You’re out on the road soon, so what’s planned?
Mak: We have a spring tour booked to promote the EP that were so excited about, and gagging to get back out there, as playing live is what we love to do! You can catch us in London, Exeter, Bristol and Manchester in early April.

~ Which famous person would you love to get to drive the tour bus?
Huw: Bill Nighy no question, a personal hero of mine and I think he’d be a lot of fun but would also keep us in line! I’ve watched Love Actually too many times, probably.

~ Are there any other new bands or musicians local to you in Leeds that you recommend we check out?
Mak: Theres a few tasty artists coming through in Leeds, check out our mate Ramona Rose who is a fantastic song writer/ loop artist, Sam Wilde who is coming on tour with us in April, and Talkboy who are seriously smashing it atm!

~ Which famous song by another artist would you love to have written yourself?
Huw: We’ve played Fisherman’s Blues by The Waterboys ever since we’ve been a band and its pretty much always been a staple in the set. Were pretty proud of our version and it’s my favourite song in the world. I really really wish i’d written it 😦

~ If you were invited to curate a festival stage, what five or six bands/artists would you invite to perform?
Huw: I’ll answer this, because Mak would have Bloc party and Kanye playing all day long… but I would have: The Growlers, Rainbow Kitten Surprise, Nathaniel Rateliff and the Nights Sweats, Julia Jacklin, The War on Drugs, and Edward Sharpe and the Magnetic Zeros all in my back garden plz, thanks! (there are so many others I haven’t added)…

~ Aside from music, do any of you have any other creative skills? (or obscure talents!)
Mak: Sam sells tampons, Huw makes Sushi, Luke writes Jingles for CEO’s in chicago, for their hold music… Callum lays the most gorgeous patio you’ve ever seen… he’s got lots of pictures (don’t ask).

~ Who are your musical Guilty Pleasures? Don’t panic, no one will read this bit!
Mak: We listen to Girls Aloud a lot in the van 😀

~ What are your plan for 2020?
Huw: We are releasing our EP and touring in April, so a lot of stuff is happening! We hope to be playing some festivals in the summer and then another tour in the autumn! It’s all go go go!!!