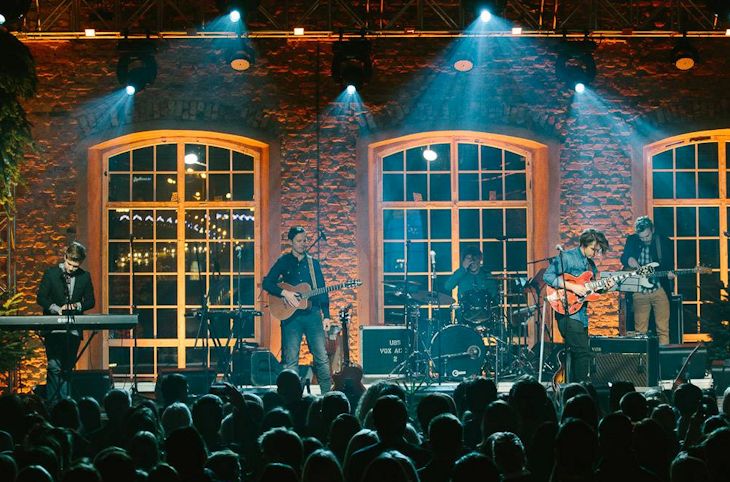 Last Autumn in Emerging #33 we said about Latvian 4-piece Carnival Youth that “if they keep this quality up, we’ll surely be back there again soon“.

Well, we’re now back in Riga (via Black & White Music) to have a Q&A with Emils and Edgars from the band, who play an engaging mix of indie and neo-folk which has seen them perform at London’s KOKO and Brighton’s The Great Escape festival. Read on though, to find out what they appear to have in common with Dave Grohl, and what Hobbit feet and blueberries have to do with rock ‘n’ roll…

~ Where are you right now, and what can you see?

Me and my brother are driving form the seaside to the capital of Latvia, we see the most beautiful countryside with its fields and forests.

~ You formed in 2012, but how did the four of you meet and decide that you wanted to be in a band together?

We met in school, it all happened very naturally. When we started playing together we did not have an aim to become a band, we did it for fun. Everything else came later.

The best advice was to not take advice from others!

~ Do you have any band rules?

Last year we graduated from high-school, and the rule was: if someone applies for a university, the priority still is the band, and if there’s an exam and a gig coming up at the same time, the concert comes first.

~ What’s your most memorable UK gig, and why?

For me, it’s our first gig in London, we played in a small bar and Kit Harington was there, and as we are huge fans of Game Of Thrones we were super stoked!
The most epic one though was at KOKO, because the venue by itself is beautiful. However, we haven’t had that many gigs in UK that we could not remember all of them.

A few concerts here and there, have fun, and clear our heads for new sounds.

~ Are there any other new bands or musicians from Latvia you that you recommend we check out?

~ Describe your most embarrassing musical moment?

There are none, but from time to time we like to fall from a stage.

Edgars – I gathered blueberries, cherries and cloudberries.
Emils – Had a chat with my cat!

~ If you could have a superpower for a day, what would it be, and why?

Emils – Have Hobbit feet, I would go for a good walk, hang out with Yetis.